👉 We've also built Jumpstart Pro which is a version of Jumpstart that includes payments with Stripe & Braintree, team accounts, TailwindCSS, and much more.

All your Rails apps should start off with a bunch of great defaults. It's like Laravel Spark, for Rails.

Want to see how it works? Check out the Jumpstart walkthrough video: 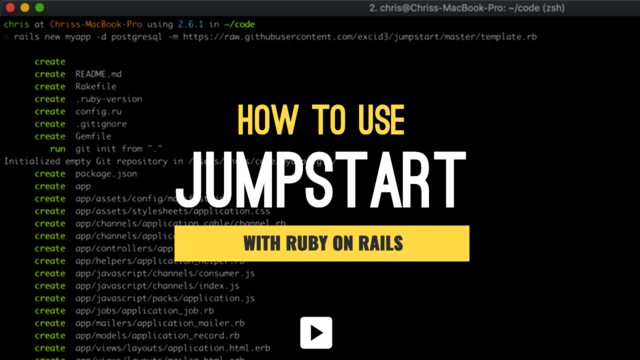 Jumpstart is a Rails template, so you pass it in as an option when creating a new app.

You'll need the following installed to run the template successfully:

Or if you have downloaded this repo, you can reference template.rb locally:

To run your app, use foreman start.

This will run Procfile.dev via foreman start -f Procfile.dev as configured by the .foreman file and will launch the development processes rails server, sidekiq, and webpack-dev-server processes. You can also run them in separate terminals manually if you prefer.

A separate Procfile is generated for deploying to production.

We use the encrypted Rails Credentials for app_id and app_secrets when it comes to omniauth authentication. Edit them as so:

With the environment, the service and the app_id/app_secret. If this is done correctly, you should see login links for the services you have added to the encrypted credentials using EDITOR=vim rails credentials:edit